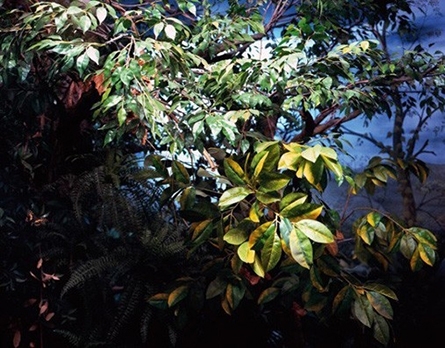 Manon Lutanie: How did you get the idea for this series of photographs?

Dune Varela: One day, I visited the San José Natural History Museum in Costa Rica. The museum is on the outskirts of the city, completely isolated, in the middle of nowhere. It houses a collection of antiquated stuffed animals that are arranged in re-created natural settings, called dioramas. I wanted to create a series based on these dioramas. A naturalistic diorama is like a photograph: both a reproduction and a fragment of reality. It's a scenographic creation that also seeks to surpass this reality by creating its own representation of the world. It's strange that it should be Louis Daguerre, the inventor of the daguerreotype, who also developed the diorama. Originally, the diorama was a panoramic painting used in theatre, illuminated in such a way that the spectator had the illusion of seeing a real landscape. Diorama literally means "to see through". In a naturalistic diorama, there is the notion of identifying animal species, of informing in a scientific way – just like photography in its early stages. Dioramas are also a way of putting a frame onto nature. I wanted to create a mise en abyme through the photographic image, which in itself is the delimitation of a visual field. I also wanted to work on landscape. And this kind of aestheticization of nature within a museum appealed to me.

Did you know right from the start that you would associate these photographs, taken indoors, with photographs taken in a natural setting?

My work is a constant flow between what is thought out and conceptualized, and what I perceive intuitively. I always start with an image and build upon it. I try to establish connections. It was seeing a diorama that led me to develop a story on the artificialization of nature. In this series, the choice of images has more to do with analogy than harmony. Associating "real" landscapes with photographs of naturalistic scenes was also a way to question the representation of reality. The idea was to play on different degrees of perception. I like to blur the edges between natural and artificial, real and fictional. I seek out that space where the reality of the photographed object, as well as the image itself, becomes uncertain: is it a set, a real landscape, or a painting? Landscape, in contemporary photography, mainly focuses on peri-urban zones. I wanted to take a different approach. What interests me is the theatricalization through which humankind repossesses Nature, and in particular the reconstruction of wilderness zones within closed spaces for scientific or cultural purposes. When I photograph dioramas, I’m recording landscapes that are constructed and immobile. They are sets, archetypal images of nature. Associating them with real landscapes allows me to extricate them from their frames, to make them exist in a different way.

When one of the photographs was exhibited at the Maison européene de la photographie a few months ago, you told me that someone, upon learning that you were the artist, said that it resembled you. How so, in your opinion?

Maybe because I look like an animal: freckle-spotted like a leopard, giraffe-like colouring… And because I spent my childhood across from the Jardin des Plantes. I used to sneak into the Grande Galerie de l’Évolution, which was closed for years and forbidden to the public. My neighbour Armin and I had found a secret entrance through the right wing of the building. This huge space, plunged in darkness, housed a large collection of taxidermied animals. We had a ritual of exploring the "forbidden gallery", on tiptoe and holding flashlights, slipping in and out of the stuffed animals’ frightening shadows.

At one point during the layout process, the photograph of the African wild dogs (which look like hyenas) was on the right-hand page. On the left, there was a photograph of your son, naked, standing with his back to us. I asked if it didn’t bother you that these two photos were opposite each other, because the wild dogs, on the right, looked like they were heading towards the child. You insisted on keeping it that way. Similarly, on the page following the photograph of Jules in the forest, we see a wolf howling. What does staging the child in this way represent for you?

Is the child in danger from the wild dogs and the wolves? Or is he in danger from the artificiality of the reproduction of an idyllic state of nature? In other words: is it the wilderness that creates the danger - or the taming of that wilderness? Staging the child this way heightens the disturbing aspect of the series. His image can be taken as a human diorama – as the memory, the last trace of something that was. An image of resilience. The child fits into the landscape naturally; he belongs to it. We, as adults, engage with landscape through observation, even detachment.

Your son appears in the book three times, making him the only recurring figure. In what way is it meaningful for you that it be your son and not just any little boy?

It’s true that my son is present in all of my photographic work on landscape. In some ways, he’s the one who taught me to look at nature differently. Jules’ landscapes were micro-landscapes: they circumscribed a territory that was accessible to him, that was to his scale. The "Garden" series focused on the physical relationship with landscape, or to put it more correctly, with territory, in the animal sense of "belonging". The framing and perspective of the landscape were defined by the person being photographed. Conversely, for Impalas, lycaons et autres paysages, I placed him in a landscape that I’d chosen. He’s my son; with him, I was free to wander about without formally organising a photo shoot. Obviously, there’s something more spontaneous in this kind of approach. I can’t really say why, but I know it was essential for him to appear like that, naked like an animal.

Nude child photography is the subject of a lot of debate today. Did you hesitate to show these images?

I realize there’s a lot of controversy surrounding children and nudity. Society has to hide its real problems, after all. I’ll simply note that we’re confronted every day, in our daily lives, with the trivialization of sexuality in fashion magazines and other media, and that at the same time, simple nudity causes offence. Censorship is distorted by this kind of thinking.

There’s a sadness in this pursuit of beauty, and a kind of longing to capture what is pure and might soon vanish (certain animal species, certain protected landscapes, childhood). This sadness is heightened by the fact that the dioramas themselves are an idealized (more than scientific, sometimes) re-creation of nature, don’t you think?

In the beginning, I wanted to call this series "Paradises lost". But that title seemed full of nostalgia, and that's not what these pictures are about. There’s no doubt something here that touches on disenchantment and escape. And perhaps a feeling of sadness, of absence.

The thing that places these photographs in the modern world – more so than the dioramas, which themselves are quite ancient – is a tiny detail: the blue plastic sandals. I find this detail to be absolutely fundamental in the book, because on its own, it demolishes anything nostalgic about your approach. With this little stroke of blue, we understand that we’ve left the natural world and that the idea isn’t to re-create its exact replica.

My pictures are staged but I enjoy accidents, like those blue plastic sandals he wanted to keep on – a detail that seems like a mistake, but in the end makes the picture anachronistic or contemporary, depending on the point of view you choose. I work in silver print, and that implies an element of uncertainty, of mystery every time the shutter clicks. And there's tension while waiting to see what the negative will reveal.

This series is a bit like a bestiary, but an ancient, mythical bestiary. It’s obviously not about making an inventory of the most common animals. Apart from the leopards, the lion and the wolf, the animals photographed are not immediately identifiable for most people. Moreover, the lion isn’t represented in the usual way: it seems starving and solitary. While we were working on the choice of pictures, you decided not to include a photograph of a family of brown bears – even though it was an excellent shot – because there was something friendly about them. What’s the meaning behind your choice of animals, and did you look for any particular "expressions" in them?

I like it that some animals are strange and not recognizable. I wanted to avoid the "Walt Disney", idealized image. With photography, I often seek out the moment where everything seems to be suspended, caught between two states – the moment before everything changes. It’s true that with taxidermied animals, there's an opposition between the animal’s real death and the aesthetic desire to make it seem alive. The feeling of suspension is heightened by the taxidermied animal’s own stillness, which creates an unsettling temporality.

It’s strange, because what we don’t actually see in the book, although we realize it must be so, is that the animals are filled with straw – filled with the landscape, in fact. I’m very aware of this every time I look at the images: the omnipresence of the plant world, even inside the animals' bodies.

The first time I touched a taxidermied animal was after the Deyrolle fire. I had to photograph certain animals and move a half-charred zebra. When I touched it, I felt such repulsion that I couldn’t move it, as if the fact that it had been burned made it really dead. All I could see was the hurt, wounded animal. In the end, I photographed a Deyrolle room that had no animals, the laboratory, which in fact looks like the storeroom of a natural history museum. I didn't sense death in this way with the dioramas. Arranged as living paintings, the animals looked like landscapes to me, and it never struck me that they were full of straw. The animals had moved beyond a simple "still-life" and become a landscape.

Does the series come to a close with this book?

This series is finished but I will continue to photograph dioramas in other natural history museums, because I won’t be able to help it!

What are you working on currently?

At the moment, I’m working on several series. I’m still exploring the artificialization and framing of nature through the re-creation of natural settings in zoos, botanical gardens and dinosaur parks. I’ve also begun a series of portraits of children who are barely visible, hidden behind bushes, leaves or trees. The idea came to me one day as I was walking in a zoo: I peered into the shadows behind some bushes and found myself looking deeply into a kangaroo's eyes. There was something very beautiful in the animal’s gaze – a fragility and a magical strength. There are moments that photography cannot and must not record, but that it later attempts to re-create.

Translated from the French by Anne Appathurai